The History of Motorcycle Safety Wear

Motorcycles have long been a symbol of freedom. For some, it is even a symbol of rebellion. The idea of hopping on a motorcycle and hitting the road has a certain appeal that not many things in life offer. 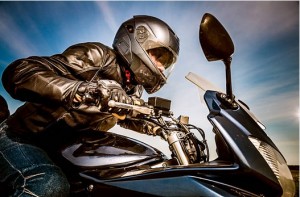 Unfortunately, this feeling of freedom also comes with the risk of injury. While nearly every motorcyclist in this day and age understands this risk and takes precautions in order to protect themselves, this has not always been the case.

The history of motorcycle safety gear is a surprising one, to say the least. Read on to learn how each of the safety items you take for granted came to be and just how lucky you are to live in this time when safety is taken so seriously.

Believe it or not, motorcycle helmets have not always been around. In fact, the first motorcycle helmet wasn’t even thought of until 1935. Meanwhile, the motorcycle was invented sometime in the late 1800s, meaning motorcycles had been around for several decades before anyone thought to protect their head during a ride.

When someone did finally think of creating some sort of head protection, it was a man by the name of Hugh Cairns. Cairns was a neurosurgeon, and was led to begin this process of inventing motorcycle head protection when he lost one of his patients due to a motorcycle accident.

Although Dr. Cairns began his research and invention in 1935, the first motorcycle helmet patent was not submitted until 1953 by Professor C. F. “Red” Lombard.

The very first motorcycle helmets were sadly not very effective. These attempts at head protection were constructed almost solely of leather, and did little more than prevent road rash. Fortunately, this did change over time, and by the 1960s, most helmets were constructed using fiberglass and cork or polyurethane foam.

Most modern helmets are made using plastic, carbon fiber, or Kevlar. These have capabilities far beyond those first helmets, and continue to be improved upon even now. This is wonderful news for motorcycle enthusiasts who can now ride more safely than ever, thanks to some pretty incredible headwear.

During the early years of the motorcycle’s existence, very little thought was given to the type of clothing one might wear when out for a ride. However, during World War I, when the use of motorcycles in the military was prevalent, it became apparent that certain things must change in order for a person to safely ride.

During this time, coats became shorter in order to avoid having them caught in the spokes of the bikes. Additionally, heavy boots and pegged breeches replaced the older uniforms for those who rode motorcycles. Over time, civilians also began to take note of the need for safety-wear during motorcycle rides, and adopted similar clothing for riding.

That said, this look was not actually very fashionable. Therefore, when Marlon Brando appeared wearing a leather jacket and riding a motorcycle in the film The Wild One in 1953, the public was thrilled to have a new biker look to latch onto. Obviously, this look stuck, and is one bikers still wear to this day. Luckily, the leather jackets are actually quite capable of protecting the rider from road rash. This is especially true of the newer jackets, designed just for motorcyclists and made specifically for safety.

People have been wearing protective eyewear for a very long time. After all, snow, wind, bugs, and sunshine are all best kept well away from the eye, thank you very much.

The first known protective eyewear was made and worn by the Native American peoples in the very far north of the American continent. These natives, or Inuits, carved simplistic goggles from caribou antlers. The goggles fit much like the wraparound goggles of today, and included a small slit for the user to see through. They were worn to protect an individual’s eyes from the snow, and were likely fairly effective.

The next big advancement in safety eyewear usage took place in 1880 when inventor P. Johnson created a pair of safety goggles for use by those who worked with very bright light. The lenses were constructed of two layers of semi-opaque cloth, and as you can imagine, they didn’t provide the wearer a great deal of visibility.

Luckily, in 1885, another inventor by the name of Arthur Fullicks made the world’s first safety glass by bonding several layers of glass together. Determined to improve the glass, Mr. John Crane Woods later added transparent cellulose nitrate between sheets of glass. Unfortunately, the glass still did not provide the best visibility, so the idea of using it for safety eyewear didn’t really take off.

In 1910, French chemist Edouard Benedictus picked the idea up once again, and after some experimentation, established patents for his laminated safety glass. This glass was used in a variety of items—including the gas masks used during World War I—and from there it made its way into other fields, including the motorcycle industry.

As you can imagine, motorcycle goggles were well loved by motorcyclists of the early 1900s, and by the 1910s nearly every motorcycle rider on the road was sporting something to protect their eyes from the bugs and wind.

After nearly 150 years, we are still working on ways to improve the safety of our motorcyclists. That said, plenty of advancements have been made already, meaning there is no reason you shouldn’t be riding the roads in safety by taking a few simple steps.

As we learned earlier, one of the most important steps you can make is to invest in a good set of safety goggles of glasses. Why not take a look around our shop and see what you can find that suits your needs? With all of the styles and lenses we have available, we are certain you will find something you love.